From where it all began 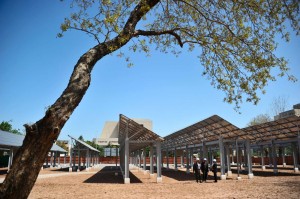 From where it all began

I remember vividly when I first saw the tender for solar power project in the newspaper given by the Pakistan Engineering Council at their Islamabad site. I thought, now here’s the break we have been waiting for. Finally, we have a project, where the client will have the money for a properly designed system and a project which will propel our company in the list of big league players.

The initial optimism later turned into despair when all the local/desi companies were turned down for being “technically non-responsive” and instead the project was given to Mistubishi Japan, who subcontracted it to Sanyo Japan, who further subcontracted it to Tobishima Japan, under the financing of Japan International Cooperation Agency JICA. The consultancy for the project was given by Nippon Koei Japan. I guess, the Japanese took the saying “charity begins at home” to heart.

There’s no denying the fact that most of the desi companies who were bidding for the project did not have the technical expertise, like the ones who were awarded the contract. But how will we train our engineers if we keep awarding the projects to outsiders. This is a dilemma, that can be debated at length and very sound and valid arguments can be given for both sides.

Now coming back to the current day solar monsoon in Bahawalpur, history is still repeating it self, and the criteria required for solar consultancy and EPC Contractor states clearly, “10 years of international experience”, which none of the desi companies have. It’s a classic catch 22 situation, if we relax the selection criteria, we risk non-quality work and if we tighten the criteria, none of the desi companies qualify.

In this situation, I think the way forward should be to make it mandatory for foreign consultants and contractors to make joint ventures with local consultancy/engineering and contracting companies so that our local engineers and labor can be trained and get the necessary skills for future projects. This blog does not have the space or time to debate on how to “retain” those skilled engineers and labor in Pakistan after they are equipped with necessary tools to take on projects of similar scale and nature.

I have to admit that there’s tremendous amount of helpful material still present on the Pakistan Engineering Council website, on its design, construction and commissioning of the 178 Kilowatts solar project, complete with engineering drawings and pictures of various steps of the project. Well done PEC, because you were the pioneers of envisioning Pakistan’s first large scale solar power project and it was a job well done.